Posted on February 2, 2016 by mattgoestochurch 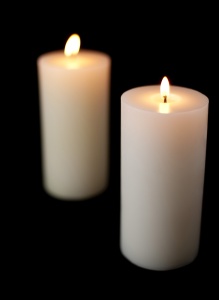 Heb 2:14-Heb 2:18 GNV Forasmuch then as the children are partakers of flesh and blood, he also himself likewise took part with them, that he might destroy through death, him that had the power of death, that is, the devil, And that he might deliver all them, which for fear of death were all their lifetime subject to bondage. For he in no sort took on him the Angels’ nature, but he took on him the seed of Abraham. Wherefore in all things it behooved him to be made like unto his brethren, that he might be merciful, and a faithful high Priest in things concerning God, that he might make reconciliation for the sins of the people. For in that he suffered, and was tempted, he is able to succor them that are tempted.

Rather than replicate the verses from the English Standard Version which our Church uses, I’m going to quote from the 1599 Geneva text.

So why does the devil have power over death? I am not clear about this. Surely only God has power over physical life and death? Perhaps the devil, lost that power when Jesus died and was resurrected – that seems to be the implication of the opening sentences. The passage goes on to say that those who live their lives in fear of death need not do so any more because of Jesus Christ.

Perhaps we could consider fear itself as the devil? The great fear of physical death, of our own mortality, is the veil that stops us from even trying to peer into the life that lies beyond? This cosmic short-sightedness causes us to live a life of outward-looking distraction, leading inevitably to the neglect of our spiritual development and the atrophy of our spiritual faculties as we get wrapped up in fulfilling our physical, sexual and emotional desires.

The passage ends with an explanation that by Jesus taking human form and fully experiencing human life with all it’s temptations, he was able to empathise with us and draw us away from the outward-looking life, and help us focus on the true purpose of our lives here on Earth.

I like the description of Jesus Christ as a merciful and faithful high priest of God. Isn’t that what we are all aiming for? I find that the personification of God as a ‘Him’ doesn’t work for me and instead prefer to think of God as the Tao: the absolute principle underlying the whole of existence and non-existence. Imagine being alive and in a perfect harmony with that principle and teaching others how to achieve the same blissful state? That’s certainly the aim I am striving for in life.

22 [k]And when the days of [l]her purification, after the Law of Moses, were accomplished, they brought him to Jerusalem, to present him to the Lord,

23 (As it is written in the Law of the Lord, Every man child that first openeth the womb, shall be called holy to the Lord,)

24 And to give an oblation, as it is commanded in the Law of the Lord, a pair of turtledoves, or two young pigeons.

25 [m]And behold, there was a man in Jerusalem, whose name was Simeon: this man was just, and feared God, and waited for the consolation of Israel, and the[n]holy Ghost was upon him.

26 And it was declared to him from God by the holy Ghost, that he should not see death, before he had seen that Anointed of the Lord.

27 And he came by the motion of the spirit into the Temple, and when the[o]parents brought in the babe Jesus, to do for him after the custom of the Law.

28 Then he took him in his arms, and praised God, and said,

29 Lord, now [p]lettest thou thy servant depart in peace, according to thy[q]word,

31 Which thou hast prepared [t]before the face of all people,

32 A light to be revealed to the Gentiles, and the glory of thy people Israel.

33 And Joseph and his mother marveled at those things, which were spoken touching him.

34 And Simeon blessed them, and said unto Mary his mother, Behold, this childis [u]appointed for the [v]fall and rising again of many in Israel, and for a [w]sign which shall be spoken against,

35 (Yea and a sword shall [x]pierce through thy soul) that the thoughts of many hearts may be opened.

36 [y]And there was a Prophetess, one Anna the daughter of Phanuel, of the tribe of Asher, which was of a great age, after she had lived with an husband seven years from her virginity:

37 And she was widow about fourscore, and four years, and went not out of the Temple, but served God with fastings and prayers night and day.

38 She then coming at the same instant upon them, confessed likewise the Lord, and spake of him to all that looked for redemption in Jerusalem.

39 And when they had performed all things, according to the Law of the Lord, they returned into Galilee to their own city Nazareth.

40 And the child grew, and waxed strong in Spirit, [z]and was filled with wisdom, and the grace of God was with him.

The Canon who lead today’s service did a wonderful job of bringing this passage to life, providing some wider context to the story and explaining that Simeon and Anna, with the wisdom one gains with age, were able to recognise the infant Christ.

I was left however feeling that by brushing over Simeon and Anna’s ability to recognise Christ and foretell the future by putting this down to the wisdom of old age, an opportunity to awaken something in the congregation was missed.

Looking first at Simoen, we are told that he was just man and that the Holy Spirit was upon him, so much so that God had spoken to him in a dream. He sounds like an amazing man in that he has a clear channel of communication with God. This makes me want to learn more about him and how it was that he acquired this gift? We’re also told that he came to the Temple by the motion of the Holy Spirit. Again, what work has this man done on himself to enable God to usurp his freewill (or perhaps to align his freewill with God’s will) to ensure that his Divine destiny is fulfilled?

Turning to Anna, the scripture gives us some answers to these questions telling us that she had fasted and prayed in the temple for decades, day and night. This superhuman standard of devotion had rendered her able to see the Divine where others would have seen just another baby.

Anna really interests me. For those of us who are busy balancing family life, a career, hobbies and our spirituality, how can we ever find enough time to do justice to our real purpose of existence, which today I would define as direct experience of God and the transmission of that experience to others (tomorrow that may change as I have a tendency to be inconsistent with my thoughts, ideas and opinions)? How can we gather enough spiritual momentum to enable our inherent spiritual gifts to bloom? In Anna’s case her spiritual gift was discernment: the ability to see inside somebody, to their true essence and as such she recognises Jesus for who He is. How will we recognise the spiritual giants walking through our own lives? What are we doing to encourage the development of our own spiritual gifts?